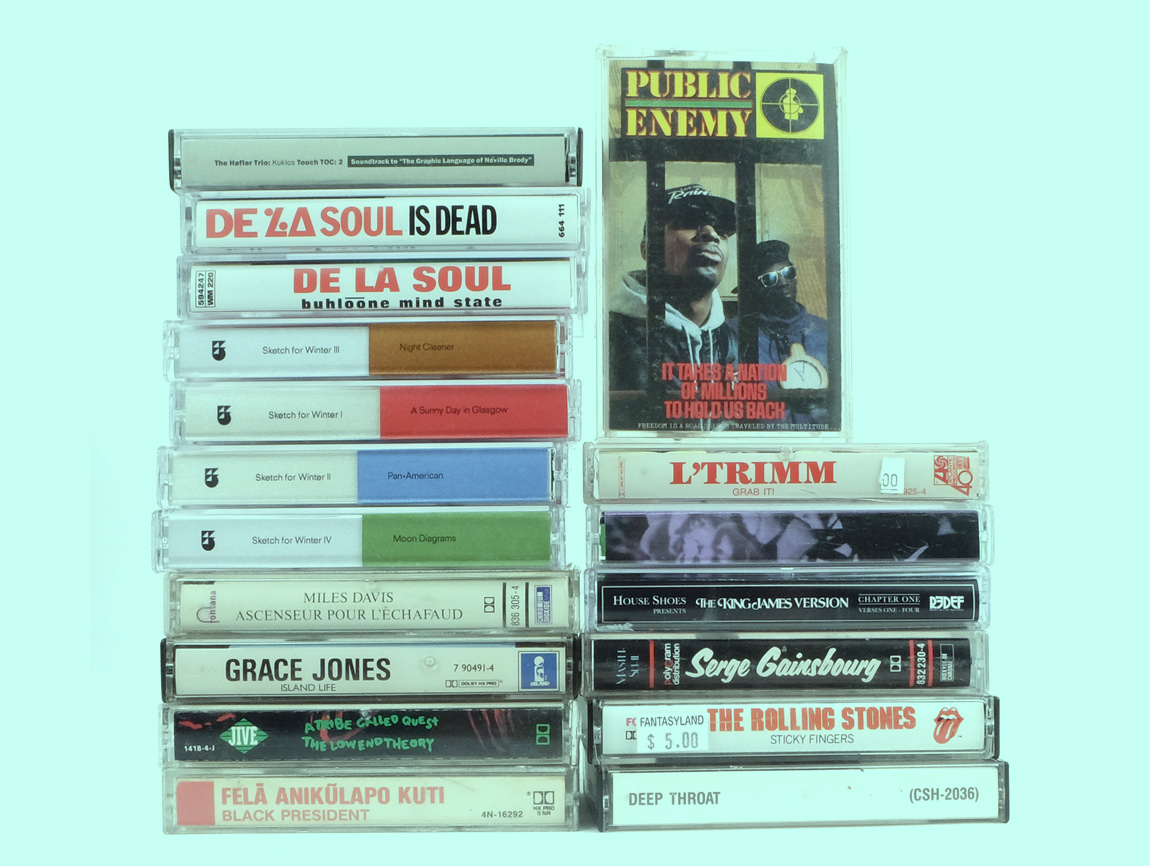 Karl Injex sits down with Geographic North’s Farbod Kokabi and Eothen ‘Egon’ Alapatt of NowAgain Records for an informal discussion of cassette culture.

Karl Injex: So, we’re talking tapes. I suppose, to begin, we should recognize that over the past few years there has been a marked resurgence in the appreciation of cassettes, and also the production of cassettes by labels.

KI: In fact, they seem to have taken on a
kind of totemic quality. Even if you have the digital file, and may or may not even own a tape deck you’re still buying the cassette.

EA: First and foremost, tapes are a symbol of how much you care. They’re also a form of rebellion, a stab at permanence with a very impermanent medium. I also think its pretty cool to have an archaic form of communication at your disposal, and I think a lot of kids are into that.

KI: It’s a way of expressing your enthusiasm for a given band, artist, dj.

EA: I think enthusiasm is a good word to describe it. It’s a great way to show that you’re an enthusiast. The connoisseur is gonna cop the vinyl, the enthusiast is gonna buy the cassette to show that they care about a band, a scene, a movement.

KI: And the idea of obscurity. In an age of digital ubiquity where all information is available all the time, people are seeking out ways to hide, to hang out in a cool, analog corner.

Farbod Kokabi: It speaks to the idea of exclusivity in general, and counterculture. There are not many ways to differentiate yourself nowadays, and to take it back to cassettes is a way of challenging the immediate, digital culture.

EA: Another thing we shouldn’t gloss over is the fact that, especially in the 80s and 90s, you could easily and cheaply produce a recording on cassette. You could be an indie band, a rapper, a spoken word artist, whatever. you could be Louis Farrakhan! My dad used to buy Louis Farrakhan tapes from the guys that peddled them on the street corner in Bridgeport. It was a very cool, compact, cheap way to get your message, your music out there. A lot of records from that era were released on cassette only.

KI: To your point, Farbod is currently releasing a series of cassette-only releases on his label Geographic North, and doing quite well with it. I believe each release is limited to what, 200 copies?

FK: Yeah, we do 300 cassettes per release. The most recent being  from Moses Archuleta (drummer for Deerhunter), under the moniker ‘Moon Diagrams’. For us, the reasoning is based on the financial realities. We’ve got a ton of cool music from a ton of cool people, established and emerging. We love the physicality and the intimacy of vinyl, but we just can’t afford to press every release. But with tapes, you still have this beautiful physical object, with a lot of detail and design put into the packaging, while still maintaining a viable budget.

KI: It seems the cassette fills a gap between the singular physicality of vinyl and the endlessly replicable ephemerality of digital.

EA: Absolutely. The guy that works for me here has a cassette-only label, and he does it for those very reasons. Let’s be honest, cassettes also are an easy medium to manipulate sonically, and make sound way rough. Take Dilla’s ‘Rough Draft’ ep, the early Tedesco stuff, the Poets of Rhythm these projects were recorded to 8-track cassette specifically to give them that ‘feel’.

KI: The limitations of the medium actually enhance the aesthetic.

FK: For me, it also changes the way you listen to a record, as you’re kind of forced to sit through tracks that may not be hitting for you, but potentially could grow on you with repeated listens.

EA: Sure, the forced contemplation of listening to a song you’re not that into because it takes 30 seconds to fast- forward through a 3minute track was not lost on me. Vinyl was great for that, you see the grooves, skip through and listen to what you want. Even on great albums, like ‘Fear of a Black Planet’ for example, there were tracks I’d skip over.

FK: The first actual album I got on cassette was ‘Midnight Marauders’. Every time I hit ‘8 Million Stories’, I didn’t really want to hear it but I’d let it play anyway, and just sit through it. So now, years later, I’ve conditioned myself to listen to the album in its entirety. I think that kind of aesthetic patience is one of the benefits of the cassette format.

EA: Yeah, the way that artists want us to experience their albums, for the most part, is to listen to them as complete statements. We’ve been conditioned to listen to music, buy music and consider music in a songbysong a la carte kind of way, which has become totally normal, and the album is a secondary artifact. CDs and cassettes are an easy way to enjoy an album in its entirety, although with cassettes, there is the inevitable flipping of the sides, of course.

KI: Which touches on an important  point— the duality of the cassette. And specifically in the context of the classic form known affectionately as the mix tape. Cassettes have 2 sides, unlike the flat mediums of cd or mp3. I love that about cassettes, as it allows for a play of forces between the sides the rough side/smooth side, light side/dark side. Were you a maker of mixtapes?

EA: Of course, yeah! Like everybody that was considering a career in music, I made mixtapes frequently.

FK: My parents wouldn’t allow me to spend money on records or CDs, so I spent a lot of time recording songs from the radio. That was my first method of compiling mixes. Sometimes the end of the song would get cut off, or you’d get the dj talking over the intro, but those artifacts were really important to the me.

EA: I think you’ve touched on the essence of the ever-changing formats through which music is being digested the limitations and also the romance of it all. There were so many things I hated about cassettes— they wore out, they always seemed too short, the fact that 120-minute tapes snapped more frequently than 90-minute tapes, but I think that kids coming up today, and this was particularly relevant when I was making the Ruff Draft cassettes at Stones Throw, are into tapes as a statement. There are so few people actually playing these things, it’s the idea of it that matters the most. It represents a freedom, the ability to release music in a way that could never have been imagined with vinyl.