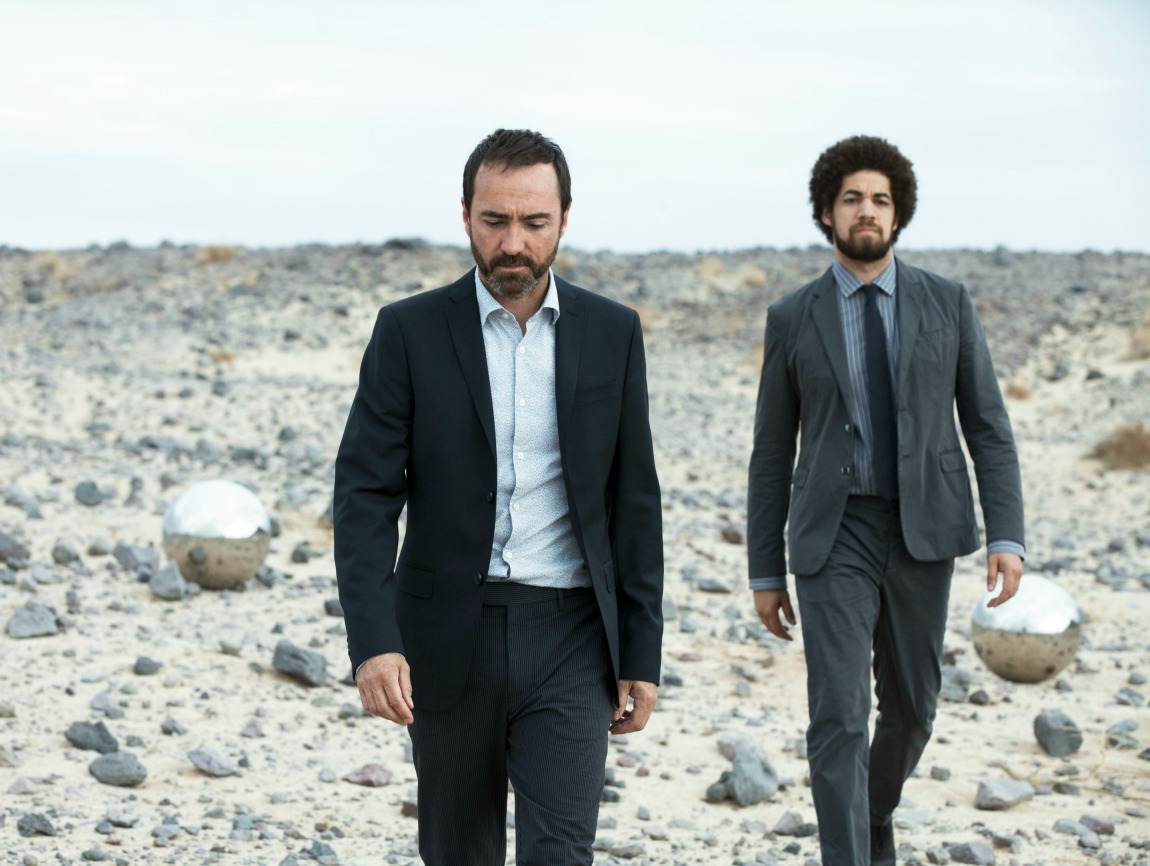 Brian Burton (aka, multi-award winning producer Danger Mouse) has had his music production philosophy compared to that of a movie director in the sense that he can create different kinds of musical worlds.

Through his work with bands like Gorillaz, Gnarls Barkley, The Black Keys, Broken Bells, director David Lynch and the upcoming release with U2, the music leans cinematic — a auditory experience that creates a sense of place and atmosphere. MA wanted to ask Brian how much the external environment he is in affects his process and ability to create these musical worlds.

On his way through Atlanta with his band Broken Bells (founded with James Mercer of The Shins), Brian spoke with MA co-founder Elayne DeLeo where they discussed the places and locations he prefers to live, work and record music; the importance of a bed in his early days; and where it all began for him, Athens, GA, his favorite place for inspiration.

Brian: Hi Elayne, how are you?

MA: Good! A little background, Brian. In our events and book, MA places a strong focus on the process behind the design — how people create, and the development of ideas about modern living, design and structure. I thought we could talk about the importance of your environment when you're creating music and recording records. Are there spaces that you like to work — in your home, in different studios — that you find inspiring?

Brian: Yes, I can relate to that idea. When I first started doing music, I worked in a dorm room and I always had a bed nearby; it was just behind me in the room. It was just this weird thing that I couldn't really work in an environment where there were duplicate endings. Does that make sense? Like, where it was timed.

Let's say, I am working 6 o’clock or 8 o'clock pm to midnight. If I knew there was a timeline, I would stop, and it would mess me up, so I always felt comfortable if there was a bed in the room. It meant I could just go to sleep whenever I was done. I did that for a long time and I always worked with a bed, so, for years, and years, and years, even when I got my house in California and had a studio, I would put a bed in there so I could go to sleep if I wanted to. I didn't go to work in a traditional studio; I just worked in smaller environments, and that was only when I was working by myself. Not with other people in the room or anything like that. But then all that changed.

Once I started working with other people, it became less about my personal preference since I had to work in different locations and studios.

The industrial areas that house a lot of studios always kind of bothered me. I didn't like the way they looked. Even when I was just driving in on the way to a studio, these industrial areas where the buildings are all the same just bothers the hell out of me. I just felt like I was going through the middle of nowhere. I like being able to get out of the studio any time I need to, or just walk around and be around other things, like going to a grocery store or to a coffee shop. Most studios are in those areas, especially in California. But this is just preference; I've done it all in many locations. You have to work there sometimes. It's not like I can really cheat.

About 8 or 9 years ago, I took my studio out of my house while I was working with the band Gorillaz. My friend Damon Albarn from the band doesn't work at home; he only works in a studio, and he works a lot, so I took the studio out of my living environment and got my own place outside. Now I never work at home, ever. Maybe at home I’ll play the piano, but even then, I don't really do that, I separate the environment now.

MA: Now that you're working with different bands, are there places that they really want you to go when they are recording? Prior to the advent of digital, where you can make a record anywhere, bands would go to Electric Ladyland; the Stones went to Nellcôte in France to record “Exile on Main Street” – it was all about the vibe and feeling of the space. Do you work with bands that want a specific environment when recording?

Brian: Yeah, every once in a while. On the first Black Keys record, they really wanted to work in a studio they found in Ohio — the middle of nowhere — called Zanesville. There's just really nothing there. They found this old studio where a bunch of cool records had been made. It was kind of a destination — in the woods really — and that's where they wanted to record. I didn't know them very well, and I wanted to work with them, so I grabbed my stuff, booked a hotel close by and we recorded everything there. Not the most enjoyable thing, but it provided a definite focus.

We got the record done in 12 days, I think. That was something where the guys had something specific in mind, but it wasn't my choice. But it turned out to be the right one. It's got the sound we were looking for; we got what we needed.

Other times I have a choice for where we record. I always prefer (for) people come to me and work in my studio, but that doesn't always happen, but recently I've been able to do the majority of work at my own space. For a long time I had a really small studio and that’s because of the geography. It was near restaurants and bars, places to go. It was a converted lawyer’s office, not really the best for recording, but a place that I didn't mind going to and…bang, bang, bang…work. I had that place for about eight years, then moved to another studio that's a little more professional but still a more relaxing vibe and not in an industrial area.

MA: Are you living in LA to make music or is it the other way around?

Brian: I think this is the complete opposite for me. Because usually when I am working with someone, I go to them. I went to Nashville when I was working with The Black Keys and with U2 I’ve been working with them on an island. Sometimes when I’m making a record, it ends up being just me. They have their own lives. They have their own families. They have to leave to go to work and then they come back for me. I get there, go back to the studio, go to work, go back to the hotel room, and the rest of the time I am by myself.

I tend to be a lot more isolated in terms of recording because I'm kind of a one-man operation. It doesn't seem to change so much — the actual process. It makes me say ‘I'm not going to do it again’, but I'm going to do it again anyway, [LAUGHS], but it's fine, as far as the actual creativity is concerned and nothing else.

I think that the least amount of distractions usually is the best. I generally like it better when I take people out of their own environments, but, it also adds more into the process, so it's always some kind of a trade-off.  I haven't really found the perfect way to do it yet. For instance, you can go to New York to record but there’s always stuff to do too. There's a show every night, bars to go to. It’s very easy to get distracted as well. But, then if you're in somebody's home town and they have their family and their fans around, that can also be something where they want to hurry up and get back to recording as well. It depends on the situation, but really it depends on the band.

For me I prefer to be at home. I tend to find the more I work in another location, the more I want to go home afterwards. The harder and longer I work, it wears me down. So, when I'm at home it's a little easier.

MA: Is there a city or a place that you've been to that inspired you in some way, whether it is environment, or just the feeling of being there?

Brian: The place that was the most inspiring for me, and is still, is Athens, Georgia. Just being there brings back memories. Seeing the signs in town for whatever band is playing just reminds me of why I wanted to make music when I first started.

It’s a place where people are there for the music; they’re not trying to be the next big thing. It's very inspiring in that way. It just kind of reminds you, ‘oh yeah, you just like to create and make stuff.’

MA: Do you try to go back there when you are in Georgia?

Brian: Yes, I was there all day yesterday. The city looked completely empty, but of course, there was the one thing that everybody's doing — one show in town that night — and everyone was there, and all the people I used to see. That's cool. It just really gives me the idea of what made me want to do this in the first place. It’s inspiring. So, it makes me want to go to back more.

MA: With “Dark Night of the Soul”, your collaboration with director David Lynch, you explored the pairing of music with the visual image. You've recently shown some of your own photography as well. Is this something you want to do more of?

Brian: I don't know when it turns from hobby to more, but I do a lot of it. I don't pretend to be a professional or anything like that.

I do take a lot of photographs and mostly they are just for me. In some way I guess I'm very visual with how I work anyway, so it was just kind of a natural progression and I have been doing a lot more of it.

Whether I'm ever going to show it or not, I don't know. I did some stuff for Broken Bells as well and I showed some of that in New York but, we'll see. I think I've got to get better work and then I'll show at some point. But I do enjoy it, especially taking photos of people.

MA: Have you photographed any places or buildings?

Brian: I look up a lot of architecture articles and photos, and in LA there’s a lot of great stuff going on. There are a lot of people trying to preserve the historical modern houses because people are buying them and then refitting them to fit a newer ideal, but they're messing them up.

I don't know much about what’s happening in Atlanta. I'm assuming a similar thing is occurring, but, it's a completely different style, isn't it?

MA: It is different — most buildings are traditional. Atlanta is starting to become a more modern city, but it's taking time.

Brian: Yeah. I would like to live in a modern home, but right now I’m in something more Mediterranean. I’ll get there one day. I check out Plastolux.com all the time. That's the website I go to at least once a week or so.

MA: We’ll check it out too. Thanks so much for your time today. Please visit us the next time you’re in Atlanta and we’ll give you a tour of the modern homes here.

Brian: Okay. Thank you so much. It's been nice talking to you.